One example of a local community attempting to implement this combination, in the face of the threat of climate change and sea level rise, is found in the city of Newport, Rhode Island. Indications are that the mean high tide at Newport has risen 11 inches (27.9cm) in the last 100 years, and historical data suggests that the rate of sea level rise is increasing. 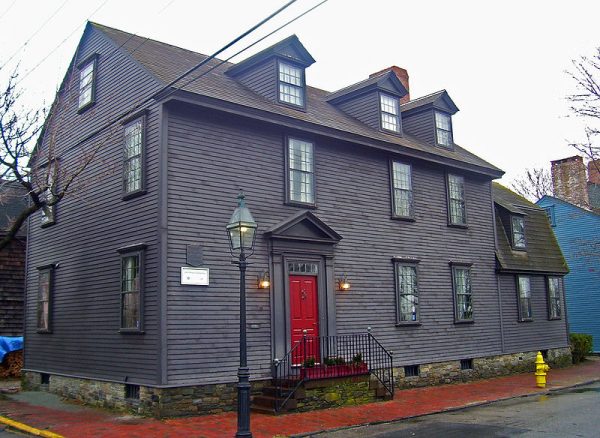 The Newport Historic District was declared a National Historic Landmark District in 1968, but increased flood activity and sea level rise predictions are a growing threat to the district. In April 2016, the Newport Restoration Foundation (NRF) hosted the first Keeping History Above Water (KHAW) conference, and used a property in the Point Neighborhood of the town, the Christopher Townsend House at 74 Bridge Street, as a case study.

According to the study, there are 968 historical structures (of which 74 Bridge Street is one) located in the Newport floodplain, with an assessed value of US$559,992,649. Total potential property loss within the floodplain area is estimated at US$3.8bn.

The earliest part of the house at 74 Bridge Street has been dated back to about 1728, when the property was owned by the father of the renowned cabinet maker John Townsend, and it has survived many floods. At present, however, sea level rise has brought the groundwater level up to above the basement floor level, and two sump pumps are in constant operation. All electrical wiring and appliances have been raised to the level of first floor framing or higher. Nevertheless, it is estimated that, by 2050, the Mean Highest High Water level (MHHW) could have increased by a further 21 inches (53.3cm).

In order to comply with the current FEMA elevation requirement, the floor level of the house would need to be raised some 7 feet (2.13m), with associated implications for its aesthetics and heritage characteristics, and the street frontage as a whole.

Investigating alternatives, the case study proposes short term remedies which include filling in the basement to a level of 3 feet (90cm) above its present floor level, leaving a ventilated crawl space below the first floor structural elements, and grading the site away from the building (as well as elevating the kitchen annex which is lower than the main building), but this will only protect it against sea level rise for a few decades, and not against storm surges or events such as a 100-year storm event.

Further flood protection measures would rely on the City upgrading its stormwater pipe-work and tide gates, creating neighbourhood dry-wells and cisterns, and developing its ‘green infrastructure’, such as greenways, levees and detention ponds.

A longer term vision involves elevating whole neighbourhoods at a time, with roads, infrastructure and terrain being raised along with houses, to a new safe level, or installing a large-scale flood barrier. This would obviously be extremely costly and financial mechanisms for collecting the necessary resources would be complex.

The study notes, however, that elevating all homes in the floodplain as identified by FEMA to comply with existing regulations (some 13 feet / 3.9m above NAVD88 level) would destroy the character of the Point Neighborhood, while failure to elevate the homes will make insurance and mortgages difficult or impossible to secure.

So while the solution seems to be a Catch-22 situation, the NRF is still exploring options and partnerships, whilst offering its experience for others to learn from. A further multi-disciplinary, national-reach KHAW conference is planned in conjunction with US/ICOMOS for November 2017.