From the National Trust’s Preservation Leadership Forum, May 17th, 2016 | a contribution to their series on climate change and cultural heritage by Jeana Wiser, resilient communities manager at the National Trust for Historic Preservation’s Preservation Green Lab and a co-leader of the Climate Heritage Coalition. This is Part 4 of a series covering the Keeping History Above Water conference held April 10–13 in Newport, Rhode Island. [Part 1| Part 2| Part 3 | Part 4]

Last year’s summer climate change edition of the Preservation Leadership Forum Journal (Available for download here) covered the new Climate Heritage Coalition jointly initiated by the Union of Concerned Scientists, National Trust for Historic Preservation, National Park Service, Society for American Archaeology, and the J.M. Kaplan Fund. The coalition seeks to better align the efforts of thought leaders and key organizations in the heritage movement regarding the impacts of climate change on our cultural heritage and create a common platform and action agenda. Nearly 30 cultural heritage leaders attended the inaugural meeting in Tarrytown, New York, which resulted in an international Pocantico Call to Action. (At the link, you can add either your or your organization’s name to the continuously growing list of supporters.) In April 2016 the coalition gathered for a second year, this time at Trinity Church in Newport, Rhode Island, following the first annual Keeping History Above Water conference. This meeting featured a larger and more diverse membership, with new organizations and experts adding value to the coalition. The 2016 meeting was attended by representatives of cultural heritage and science organizations ranging from The Arctic Institute to Sites of Conscience to the National Park Service. The conversation this year was noticeably more urgent and action oriented. Heading into the meeting, the Union of Concerned Scientists and the National Trust had two major common goals: share 2015 updates and set a 2016 action agenda.

The coalition had a tremendously busy 2015. All attendees documented their individual and organizations’ climate change and cultural heritage activities. Highlights include:

Following the report-outs, attendees broke into four working groups. The subjects—international opportunities, partnerships, advocacy, and the National Flood Insurance Program (NFIP)—had been predetermined as areas of greatest interest and opportunity based on content at the Keeping History Above Water conference.Coalition Goals for 2016

This year’s meeting and planning for 2016 centered around networks, advocacy, flexibility, and solutions. The Coalition plans to formalize a 2016 action agenda and make it available to the public, potentially through a new website. As the Coalition continues to gain momentum and exposure, it looks to the preservation, archaeology, science, and environmental communities for additional members, partners, and advocates.

If you are interested in learning more or getting involved, consider joining the Climate Heritage listserv by contacting Jeana Wiser, Coalition co-leader (jwiser@savingplaces.org). You can also attend Climate Impacts: Creating Resilient Cities and Sites in Mobile, Alabama on July 28—that symposium is sponsored by Coalition members United States Committee of the International Council on Monuments and Sites and the National Alliance of Preservation Commissions. 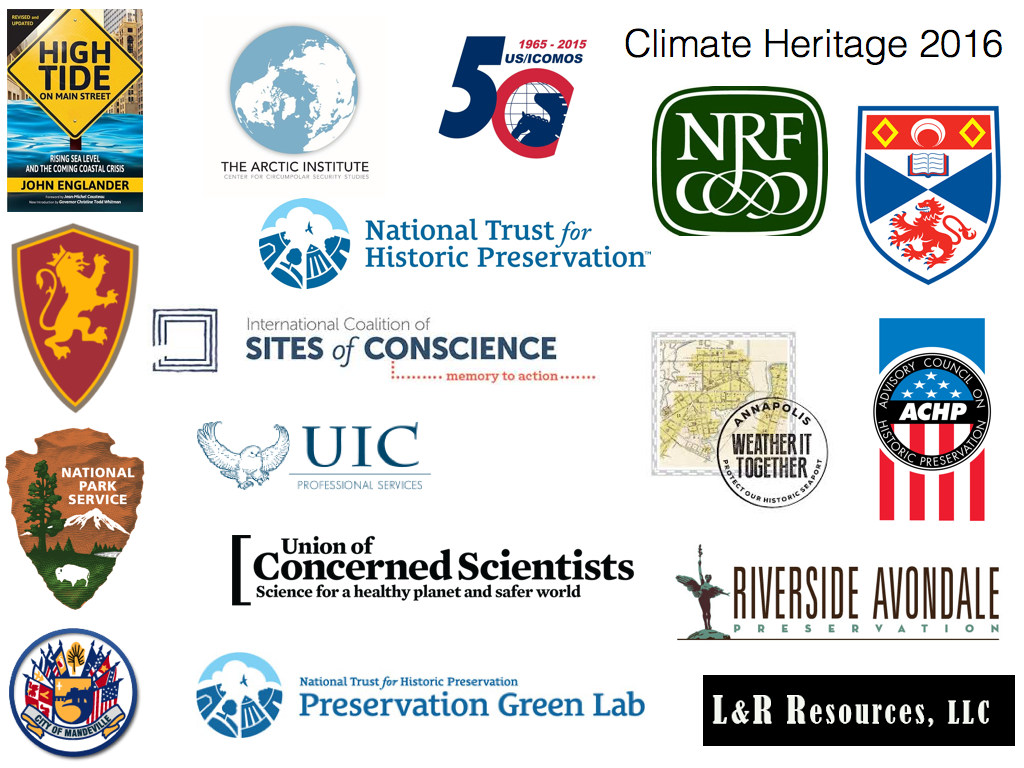 Jeana Wiser is the resilient communities manager at the National Trust for Historic Preservation’s Preservation Green Lab and a co-leader of the Climate Heritage Coalition.